Liven Up Those Corridors! 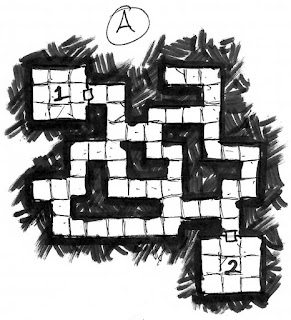 Dungeons are a thing of beauty, but too often I see empty, endless looping corridors where nothing ever happens save for the occasional wandering monster.  Mazes are awesome, options are great, but what is beautiful, isn't always playable.

Take Map A above.  All good right?  Nothing you haven't seen before.  But unless something happens in those passageways, you're going to waste a lot of time slogging from room 1 to 2 (especially if someone's mapping.)  It might look cool, might be fun to draw, might look fun to play, but it kind of isn't.  You could just do this..... 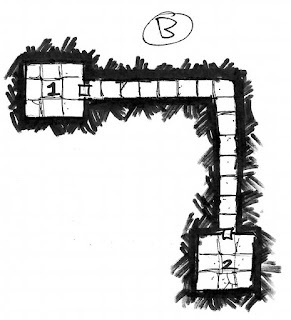 Map B might seem dull, but it's gonna make your session run a lot smoother.  You just saved about 20 minutes of unnecessary slog.  But that's no fun.  You want that dungeon to be a labyrinth.  You want that sense of exploration.  You want those players cautiously peeking around every corner.  You want them interested in the entire place.....not just the rooms.  Too often, hallways are just time-killers.

Now look at Map C below.  I've added a fountain, a one-way door, an alter, a statue, a portcullis, a curtain, some stairs, and a huge pile of rubble -- all outside of rooms.   Not everything will be dangerous or meaningful, but the players sure as hell don't know that.  Every turn of a corner becomes interesting now. 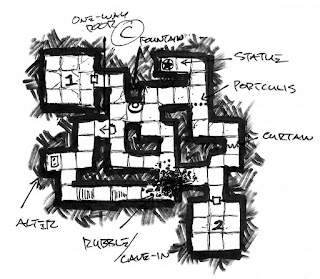 Many of these objects should do something.  There should be a trick, something hidden, a treasure, a trap, a penalty, or a perk.  At a minimum on Map C, the players will have 2 encounters while traveling between the two rooms. These encounters can make sense or not make sense, but most of them should adhere to the theme of the dungeon.

And that's all it takes to liven up the place.  Now that small, 2-room section of dungeon is packed full of goodness.

Side note:  Your map doesn't have to be so finished -- you're the only one looking at it!  Consider  Map D, it took a minute to draw.  Fill in the margins with notes and stats and doodles and you'll be good to go with a dungeon just as fascinating to behold as the most professionally drawn piece! 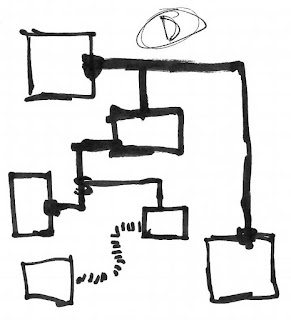 ...And Hear the Lamentations of The Flame Princess 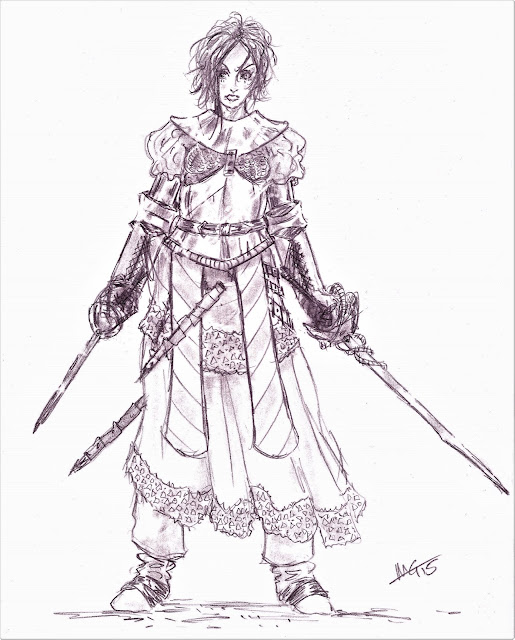 
Lamentations of the Flame Princess.  When I first encountered this game I wasn't quite in tune with the OSR.  I remember flipping through the Grindhouse Edition and thinking WTF???

Later, I flipped through A Red and Pleasant Land and thought, WTF???

Eventually the genius and creativity of the OSR hit me.  Many years, in vain, I spent searching for the perfect system (not limited to D&D) when I realized that anything I wanted to do, can be done with some version of an earlier system.  All of those thick tomes I'd been collecting, collectively became obsolete.

The OSR is packed with awesome stuff.  It has changed how I view (and purchase) RPGs.  If all gaming companies suddenly disappeared, gaming would not.  The OSR would thrive.  The DIY genie was out of the bottle long before I ever took notice.

The official LotFP character sheet is a good one and so is the modified Veins of the Earth sheet.  (I consider Veins of the Earth to be one of the best gaming books ever made.)   For the hell of it, I modified my Rynath OSR sheet to LotFP specs.  It's incomplete -- no encumbrance stuff, but that's ok.  I did this awhile ago as more of a tribute.

Been blogging for a year now.