Quick post.  I'm becoming addicted to drawing in ink only.  Dangerous.  Risky.  And sometimes better looking than something I took great care on.  Never know what it's going to be before, just make it up as I go.  Maybe save it for a project and add a story to it later.  This one just gets posted here.  It took me 20 minutes while I listened to a couple of techno songs by Suntree and Lyctum.
Reminds of Conan, which I've been reading lately.
I've been a Conan fan forever, yet I've still only read about half of Howard's stories.  Which is kinda cool because I still get to experience new original tales.  I used to absolutely love The Savage Sword of Conan magazine and I've read a few of the Tor books as well as some other Howard stuff.  I Just read Red Nails and The Vale of Lost Women.  As much as I love Howard, he can lose me sometimes because I don't find any other characters in a Conan story interesting.  I hate the scenes where villains are up to stuff.
The Vale of Lost Women is mercifully short.  Told from the perspective of some scientist brat enslaved in a savage land who just watched her brother get utterly mutilated (just seeing the word scientist in a Conan story almost breaks immersion.)  Conan's hardly in it.  I hate this character but powered through the tale by force of will.  My reading patience has all but disappeared.  If you don't get me in chapter one, I won't keep reading.  I find role-playing books easier to read than fiction these days.  Vale is definitely an odd little tale.
Red Nails was good and I can see why some call it the most D&D-like of the Conan tales.  But once again, I don't care about anyone else here except Conan.  Even Valeria wasn't as cool as I was hoping.  One scene though, was awesome:
"From wall to wall, from door to door rolled the waves of combat, spilling over into adjoining chambers.  And presently only Tecuhltli and their white-skinned allies stood upright in the great throneroom.  The survivors stared bleakly and blankly at each other, like survivors after Judgement Day or the destruction of the world.  On legs wide-braced, hands gripping notched and dripping swords, blood trickling down their arms, they stared at one another across the mangled corpses of friends and foes.  They had no breath left to shout, but a bestial mad howling rose from their lips.  It was not a human cry of triumph.  It was the howling of a rabid wolf-pack stalking among the bodies of its victims."
--Red Nails.
Every now and then Howard wrote a moment for the ages.
at June 05, 2020 No comments: 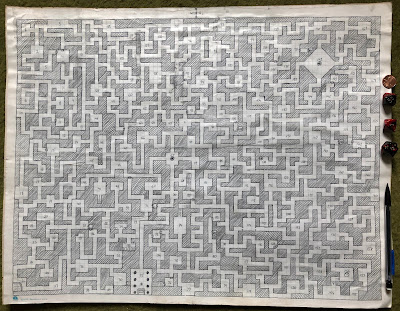 I'm surprised I haven't shown these before now.  They're from my mid-teen years; late 80's.  Somewhere I came across poster-board sized graph paper and about a week later this dungeon was done.  I then glued it onto an actual poster-board.  Surprisingly, 30 years on and it's still in pretty good shape.
I never wrote it up as a dungeon.  Making 169 rooms interesting is a challenge now, let alone then -- I've never been a huge fan of empty rooms.  One curious thing, you can go from room 2 all the way to room 154 and only pass through 3 other rooms.  An unplanned feature for sure. 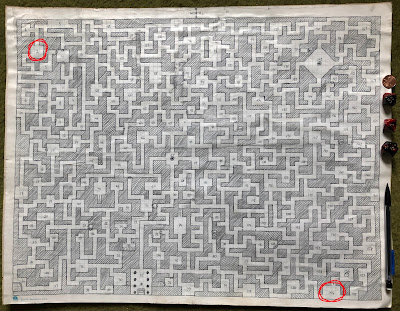 And then of course there's this bad-lad, four times the size.  Too bad I burned out.  It's much more dense than the one above and would have clocked in at around 800 rooms.  These sheets are in surprisingly good shape too. 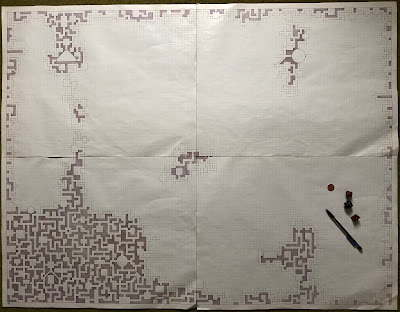 They're now artifacts that make me want to put aside what I'm working on and attempt to draw the largest, most complex dungeon of all time.  Probably not gonna do that.  Besides, how would you scan such a thing?
I loved the concept of the Dungeon.  Still do.  Always will.
Just saying.
at June 03, 2020 4 comments: