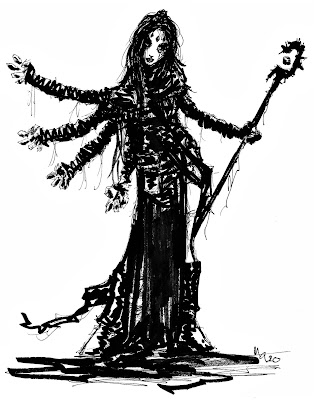 First let me say, I am working on something.  Since, Sision Tower, I've had several ideas.  Drawn lots of cool pictures -- art I WANT to use, but nothing really stuck.  Until recently, that is.  I'd put up a preview, but it's too soon.   Anyhow, I paused my current project because I haven't posted in a while.  So, on to the topic at hand, a game that's been on my mind more and more lately.....

I've owned the 3 Core Rule-Books for awhile now and recently purchased 8 more.  These books are beautiful to my eyes.  I love the art -- something I always pay attention to.  For me, art is integral to gaming.  It sets the mood, it inspires and feeds the imagination (and it doesn't have to be traditional.)  The art in Castles & Crusades (mainly by Peter Bradley) screams D&D, it screams Sword & Sorcery.  It's sexy.  It's BAD-ASS!

The Siege Engine.  If you're not familiar, this is the saving throw and non-combat task resolution system that I think intimidates some people.  It's kind of like THAC0, in that you can make it sound more complicated than it actually is.  To sum it up:  Saving Throws are based on ability scores.  You will have 2 or 3 (Humans) Primary stats and the others will be Secondary stats.  Primary stat saves start at 12, Secondary stat saves start at 18.  Subtract your level.  Subtract a positive ability bonus (or a add a negative one.)  And maybe, subtract a bonus gained from your class.  That's your save.  Add the challenge level of any particular challenge to get your target number on a D20.  Challenge level is usually based on the level or hit dice of a monster, spell-caster, trap-setter, etc.


(The books go into complex examples of running Siege in a way that assumes you are hiding the challenge level from the player, kind of like hiding armor class in a THAC0 system.  I find it so much easier to have the math done on your character sheet beforehand and simply tell the players the challenge level.)

Below is a sample of how to record this to speed up play.  This is a 1st level Illusionist.  Instead of just writing 12s and 18s for the saves and doing the calculations during play, I've recorded the final numbers below.  The reason for the 10/9 split for Intelligence is that Illusionists get a bonus vs. illusions that improves as they level up.  So, this Illusionist's save vs illusions is 9+.  If they were saving vs an illusion spell cast by a 4th level spell-caster, the save would jump to 13+.

Those stats were rolled randomly, in order, switching Dex and Int.  Illusionists have Int as the primary stat and Humans get two more, where as the other races only get one.  I think it would be interesting if your other primary stat(s) had to be determined randomly.  Here, I chose them to be wisdom and charisma.

Also, Illusionists are cool in this game.  There are 13 core classes and 14 more in The Adventurers Backpack, not to mention the additional classes found in the various well researched historical Codexes.  All hack-able in true OSR fashion, in fact, some require hacking such as the Nekuomantis (Greek Necromancer) in the Codex Classicum.  A class where some class abilities are written in a mechanically vague way, encouraging you to interpret them as you will.  I know what I would do.....

The Codex Classicum also has an Oracle (Seer) class that is very heavy on the role-play side, recommending that it be played by experienced players.  It's cool, but I prefer mechanics and plan to share some ideas for a hack in the future.

Castles & Crusades also has one of the more user-friendly, yet realistic, encumbrance systems out there.

GREAT game that is capturing more and more of my attention, so naturally, here's a character sheet.  I borrowed thematically from my 5th Edition sheets and took away the Pathfinder-like math on the C&C official sheets. 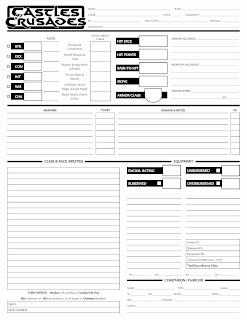 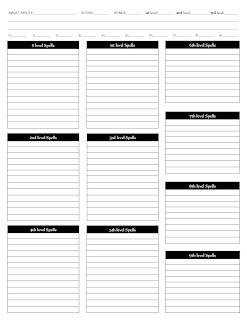