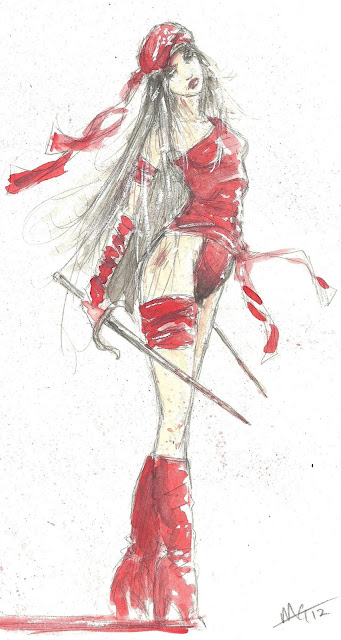 Cyan, Magenta, Yellow, and Black are the four colors that were used to color comic books -- back in the day.  If you've ever heard the phrase "Four Color Comics" or "Four Color Super-Heroes" now you know why.  So, here I present FOUR character sheets for super-hero RPGs.


Mutants & Masterminds 3rd Edition is the newest of this bunch.  It's not a bad game, a little too "point-buy" for my taste.  It's kind of like Marvel (FASERIP) mated with Champions.  Champions was an alright game to play, and I knew people that would spend hours.....no, days..... actually, make that weeks fine tuning their characters, trying to get the most bang for their hero-point bucks.  This might just be where power-gaming started.

The same situation exists with Mutants & Masterminds 3rd Edition, but admittedly, it's nowhere near as bad.  Many gamers love point-buy systems.  Ain't my cup of tea.  My imagination works best when I have to make sense of unrelated fragments.  Now, M&M 3rd does have a meticulously crafted random character generation system that is 100% balanced for their point-buy system.  It's impressive, and whoever designed it deserves credit. I just wish they had it for every level of power in the game.  Not everyone should be "power level 10." I just don't like that amount of balance.  It doesn't exist and never has existed in comics.  Anyway, point-buy is not a flaw, it's a preference one way or the other. 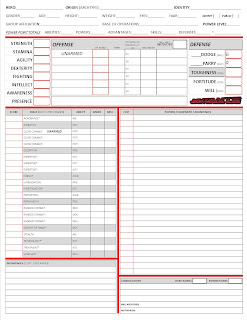 When DC Heroes came out I was heavily into Marvel (FASERIP).  As much as DC fascinated me, I never made the switch.  The system is awesome, elegant even, but I hated the fact that you had to build your character.  Might as well play Champions.

No game has ever handled different power-levels as good as DC Heroes.  From Superman to Batman and everyone in between, the rules handle the difference realistically and gracefully. 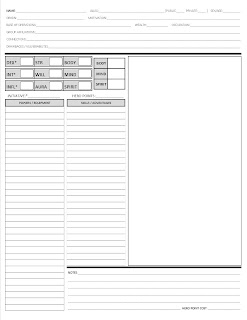 Marvel Super Heroes (now referred to as FASERIP) was my go-to game other than D&D.  I played this game so much that it ruined percentile-dice systems for me for years.  I knew the stats to every Marvel character thanks to all the source books they produced and I still, to this day, mentally rank super-heroes according to the FASERIP system.

I loved the quick and random character generation in this game and it forced you to get creative because, damn, you would roll some weird combos.  Not like we never re-rolled though ("Feeble" Plant Control, I don't think so.)

Like DC, Marvel was dependent on a chart (charts really were a thing in the 80's), but some people over the years have come up with creative ways not to use the chart (actually called, the Universal Table).  The main flaw of this game is that the powers sometimes aren't well explained.  Also, characters weren't always as strong or weak as their comic book counterparts.  But that's role-playing.  RPGs aren't movies, aren't novels, aren't comics.  RPGs are their own beast.  I think the biggest flaw in FASERIP was OUR inability to use the system to its maximum affect. 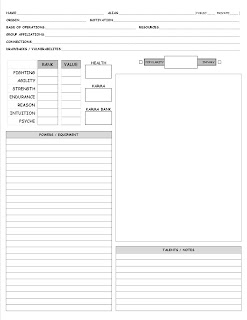 Where do I start?  This game is a random character generation paradise, but sometimes it will give you too many powers.  See, powers in this game are so well thought out, that often 1 power is like having 3 or 5 or 10!  And you might roll 4 or 5 powers.....get ready to transcribe! Often, one or two powers is plenty.

No super-hero game does gritty hand-to-hand combat better than Heroes Unlimited. Strike, Parry, Dodge, Roll With Punch, Leap Kick, Body-Block Throw, etc., it's all there.  Throw in powers and magic and you've got the most dynamic comic book action you've ever seen.

You won't be playing Superman or Thor in this game.  The power level is more attuned for street to mid-level play--which is perfect.  As of right now, Heroes Unlimited would be my go-to super-hero game.

Now, Palladium's games aren't without their flaws.  Most critics will cry about contradictory rules being scattered across books and how the system is unbalanced.  I just don't view those things as problems.  When you like a toolbox, you like it.  For me the biggest flaw in Palladium Games is M.D.C. (Mega Damage Capacity).  I simply change everything to S.D.C./Hit Points. Game on.

Physically, Palladium books are probably my favorite format for an RPG.  I love the way a perfectly-bound paperback feels.  I love the gritty black and white interior art and Palladium has some of the BEST COVER ART in gaming.

And to think, I ignored Palladium Books for years.  I currently own over thirty of them and periodically feel compelled to buy more.

Character Sheet note:  Speed doesn't do much in this game, so I added the OPTION for Speed to give an Initiative Bonus.  Just use the same bonuses that are given for P.P. 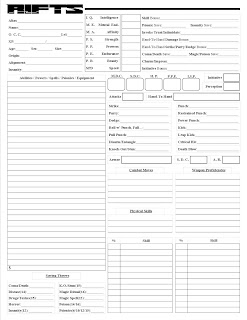 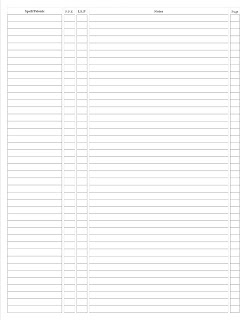 Will have to do some posts focused only on Palladium....