The Dungeon Is Life! 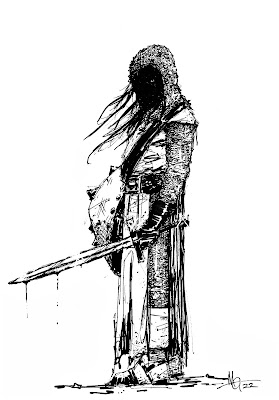 The Dungeon. The mythical underworld, of which you will steer clear if you want to have the slightest modicum of a remotely pleasant existence. Because to go there is to die much sooner and much bloodier than you otherwise will. Yet to go there is also to live, to risk, to act, to dare, to take, to kill...or be killed, to leave your mark and say to an uncaring universe as you exploit, illuminate, and beat back the darkness -- Right now, this space is mine!

You exist only for a short time and in the end, you will be broken. Life will beat you, not be beaten by you. It is grim, I know. Sure, you can soften this fate, go with the flow, evade, dare not, delve not. Perhaps you will keep breathing just a little while longer and sleep in a bed not made of dirt. But know this, friend, all will fall and be forgotten -- that is a predetermined fact!

The Dungeon is Life! It will shut doors, it will lock them. It will turn off the lights and blow out your torch. The floors will fall beneath you and walls will shift. It's pitch will terrify and haunt you. It will send countless hordes against you and then send countless more. It's poison will bite! You did not build this place. You do not get to make the rules here and you are not smart, powerful, or privileged enough to break them. This deck and every other deck that was ever put into play is mightily stacked against you!

But before you crumble in the corner, friend, remember this: You were born with something. You have learned something. You are stubborn, bold, defiant, a master of pain. Let the weak numb themselves! You welcome the Dungeon, you yearn for it. You don't care for the town or the tavern, the journey or the parley. Nor do you care that in the Dungeon, doom is your destiny. Because the Dungeon is the heart of Life and it is the heart of gameplay and it is your entire reason for being. For in the Dungeon, you are taking it right to them, a full-on assault on the deepest, darkest, secret center of all things and there you will make your stand, where the odds are always stacked high against you and you will say -- By Crom, stack them higher! 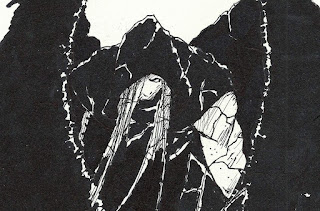 A couple of you have lamented the lack of player maps for my adventures, so in appreciation that you are indeed running my adventures, I edited out all the secret parts on the maps for Praise The Fallen & Sision Tower.

I'm not likely to do this any time soon for DATE OF EXPIRATION. That is a separate, time-consuming beast. 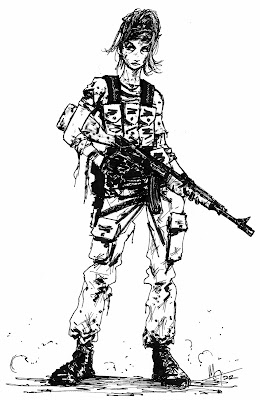 I almost played TWILIGHT: 2000, way back when. Spent a few days rolling up a character with a buddy in art class with every intention of getting together and playing. Alas, he was only an "at school" friend -- a light-hearted soul, scrawnier than my scrawny self, and a talented artist. Immediately upon graduation, he joined the Marines. Didn't see that coming. As to his fate in life, I haven't got a clue. It is recent events that reminded me that he even existed at all.

A slight tangent -- he once told me of a dream: He was at a fancy lawn party. The type of "fancy" that involved a huge back porch with great pillars and white tables and chairs as far as the eye could see. A birthday? graduation? -- some such affair. He was standing between two pillars when someone threw a grenade which exploded with exaggerated destruction. The dream went slow-motion (I think) as he stood there completely unharmed. Another man also stood unharmed, leaning against a pillar nearby, who spoke in a chill voice saying, "Depends on where you're standing." My friend spoke those words slowly, as if spoken by a stoner. For weeks after, it was our go-to phrase for laughter.

Several times in the last year, probably because there is a brand new edition, I came close to buying a copy of the original TWILIGHT: 2000. Now, out of perhaps, a morbid curiosity, I've wondered how the original timeline of that game mirrors the events we are now watching unfold in Europe, in-real-time. After a bit of research, it seems, that it does not. For in that timeline, unless I am mistaken, it all starts in 1995 with the Soviets vs the Chinese, followed by a reunification coup attempt in Germany. NATO tries in vain to avoid the conflict, but is ultimately dragged into a limited nuclear war. By 2000, it's pure chaos, ruin, and radiation, wherein your characters are trying only to survive.

Now, in the real world, we have the Russian invasion of Ukraine. This may seem baffling and sudden to many, but it's actually been building for awhile. So far, the way this fledgling war is playing out, there is an enormous risk of escalation. Of course, this actual war has weapons and elements that TWILIGHT: 2000 did not imagine (to my knowledge) such as drones, cyber-warfare, and the economic cancelation of an entire nation. Much damage can be done to countries without going nuclear, but as Putin is painted into a corner, is it only a matter of time? Prepare yourselves for the real-world debut of tactical nuclear weapons... 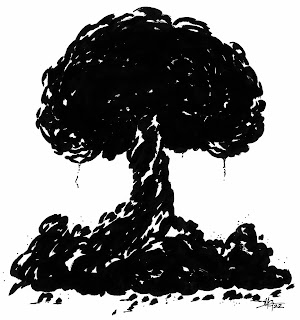 I used to have semi-recurring dreams of mushroom clouds in the distance. I would warn people -- they wouldn't listen. I would flee -- and they would die. No matter how far I got (all the way up to Alaska in one dream) the mushroom clouds were always on the horizon. Those dreams ended many years ago when a nuke finally landed right on top of me as I looked out the upstairs window. These weren't nightmares, mind you, just interesting dreams, spawned from a vivid imagination and the zeitgeist of the 1980's.

Since then, the Cold War ended.

For three decades, corporate globalism increasingly took center stage, bringing with it many conveniences for sure. Yet, looking at the violent, entirety of human history, this was a pipe-dream, or at best, a gambit very premature. What I find shocking, is that this current conflict didn't happen sooner. Doesn't it now seem like all the wars in the middle-east were naught but an interlude? And what of Taiwan? If you think there's a microchip shortage now...

These last couple of years feel like we sidestepped into a parallel universe. Perhaps that actually happened 30 years ago and we are only now returning to our regularly scheduled program.

And to think I recently said out-loud that I missed the Cold War.
at March 02, 2022 No comments: