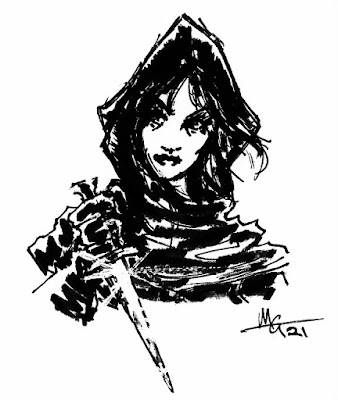 The dagger is an iconic symbol of death.

Yes, it's also a tool used to cut and skin, but it's main purpose, as a dagger and not a knife, is to kill.

At 1d4 points of damage, good luck with that. Even at low levels, unless you score a critical hit, your opponent is not going down. Now, that does make sense. There's a reason warriors took swords and axes and maces and spears into battle, and not daggers. They all had daggers, though, just in case.

As did/does every single D&D character ever made. You always buy a dagger. Always.

You almost never use said dagger. Even if you're a wizard of some sort. When most editions allow quarterstaffs/staffs (staves) to do 1d6 points of damage, a dagger is pointless. As an aside, I would argue that if a spear does 1d6, a staff should only do 1d4.

The fact that daggers were an important tool for the heavily armored knight is starting to show up in cinema. Two knights dueling with long weapons, swords, poleaxes and such, would mainly do so to tire each other out. The idea seems to have been, to exhaust or overpower your opponent, knock them prone, pull out your dagger and go for the kill. Many knight duels turned into armored wrestling matches. Lacking a time machine, such is only my current impression.

One game out there expressed this well: Pendragon by the late Greg Stafford. In Pendragon, if you make a successful grapple attack, you can get in close and stab with a dagger at weak points in your opponent's armor. Mechanically, armor is damage reduction, which is cancelled out by daggers if you have successfully grappled your foe. Since damage is mainly based on strength and not weapon, your dagger has just become very deadly indeed.

The drawback to grappling is that it's not that easy to pull off.

Let's import this to D&D.

First you need to grapple, dagger in hand. Ignore armor class for this. A grapple should be a contested "to-hit" roll with longer weapons having advantage (or +4 to hit.) If you're using Thac0, you'll need to figure out your actual "to-hit" bonus. You may allow someone to add their shield bonus to the roll, but once grappled, that person will have to drop their shield, or that bonus becomes a penalty. Strength bonuses also apply.

A grappling attempt, successful or not, is your turn spent for that round. If you succeed, your opponent may spend their round trying to escape (another contested roll) or trying to hurt you (also a contested grappling roll, doing unarmed damage) or, if they're holding a dagger, they can attempt, as you were attempting, a killing blow -- which is most likely in the form of stabbing the throat. Another option, if you've been grappled and aren't wielding a dagger, but would like to grab yours instead of trying to escape, simply make a contested grappling roll. Note for contested grappling rolls, you can not use any bonuses gained from non-dagger weapons, i.e., no matter how magical your longsword is or how proficient you are with it, it's useless to you when making grappling rolls. An argument could be made on behalf of short swords.

Killing Blow: Another contested grappling roll. If you succeed, your opponent must save vs. death or be killed instantly. If they make their save vs. death, you merely do the usual 1d4 dagger damage.

This might seem too deadly, but four rolls must go your way for it to work: Your first grapple, their resistance to that, your killing blow, and their saving throw. Also, this maneuver is much less likely to succeed against higher level/HD characters due to them having better death saves.

It brings some grit to your games. It adds some of that classic "dishonor" to daggers, and it puts just a touch of fear into the hearts of heavily armored knights when someone decides to fight dirty.

This shouldn't be allowed against non-humanoids and larger humanoids.

Unless of course, you want it to...

Rifts: To Juice Or Not To Juice? 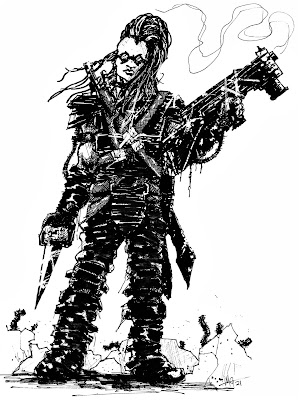 What price are you willing to pay...?

And now your body, filled with nanobots and cabled with drug-pumping tubes, is capable of astounding feats that defy the limits of humanity. You are cold and efficient -- very efficient. You're so fucking fast. The battlefield around you moves in slow-motion. It's almost too easy.

So hard to kill. You don't tire for days and when you do sleep, well, it's barely a nap.

The juice has made you the perfect super-soldier.

And after 5 years your heart will explode.

Thanks for your service.

Hope it was worth it. 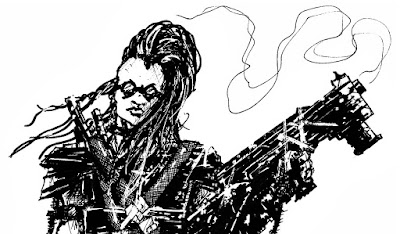 And now, some Juicer death mechanics, for which, there really are none. Juicer Uprising has a table to roll on when you reach your final year, detailing symptoms of the end such as the shakes and memory loss, but nothing that signifies death itself or even when that final year actually arrives. Savage Rifts has Burn mechanics -- which aren't bad, but I prefer...

1st level Juicers begin with a usage die of d20. At the end of every session, roll your usage die, if you roll a 1 or 2, it falls to the next die. If a session sees no or very minimal combat, the GM may wave your burn-out roll for that session. You should theoretically have many sessions (absolute, extreme bare minimum of 6) before reaching a burn-out die of d4.

Once you roll a 1 or 2 on a burn-out die of d4, death is imminent starting the following session. At which point -- after every single round of combat, you need to make a burn-out save against target number 20. Juicers already have a +8 vs. toxins which can be applied to this roll along with any bonus received from a high P.E. stat. Subtracted from this roll is your level.

If you fail this roll, your heart will explode and strange chemicals will froth forth from your mouth as your well-used and smoking body falls dead. If combat is still ongoing however, you immediately get one last free round of actions before you expire, wherein any damage you do is doubled as you burn out in a wild blaze of glory.