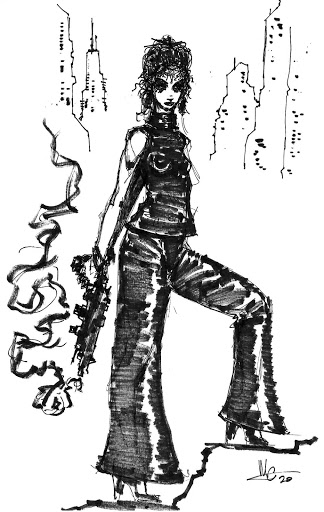 What the hell kind of gun did I draw here???

No matter what I'm into, there's something about Palladium Books that always lurks in the not-so-back of-my-mind. And the truth is, I've only ever dabbled with the system, mostly with Heroes Unlimited.

It is a toolbox, but one I'm very comfortable with. And to all of my fellow OSR hackers, Palladium Fantasy is just as hack-able as any D&D system (of course, it itself is a hack of D&D.)

So I randomly rolled some stats for the lady above, but I'll just provide the basics.....

Her main stats, after all is said and done, are:

Now, in Palladium, bonuses from high stats don't start until 16. This is an area I've hacked before, starting the bonuses at around 11 or 12 and ultimately achieving a similar value by around 30 where the official chart list ends. So basically, I just stretched it out a bit. I just don't like meaningless stats. I've mentioned before that I give an initiative bonus for Speed according to the Physical Prowess line. Something that I've reflected on my Rifts character sheet (found on the sidebar.)

She's a Private Eye which gives her decent skill packages but nothing fancy for fighting (just one of the standard combat styles: Basic, Expert, or Agent.) so I took the liberty of randomly rolling a fancy martial arts style for her and got, Hwarang-Do Karate, which is apparently a well-balanced Korean style that prefers spinning moves, jump kicks, and throws, with strikes used for finishing. Skills in Palladium are something that I kind of gloss over because you get SO DAMN MANY OF THEM. So basically, she's good at gathering information.

She also knows gymnastics which improved some of her stats as Palladium Physical Skills do -- which is why everyone takes as many physical skills as possible. My hack for this would be random skill generation. It's strange, there is so much randomness in Palladium character generation, but not when it comes to skills. I would change that.

She knows a multitude of moves that allow her to enter combat, engage in combat, and leave combat. Yep, it's that detailed. If you're willing to embrace the intricacies of hand-to hand martial arts, it's incredible.

This game also gives her the option of knowing a couple of martial arts "powers," attacks that stun, body-hardening skills (that give you more physical skill type bonuses) vanish like a ninja, and the use of CHI to heal and such.

Like a lot of Palladium books, Ninjas & Superspies is just as useful as a source/idea/flavor book as it is it's own game. There's not really an established setting; you're supposed to do that on your own. Again: TOOLBOX.

Oh and, give Palladium some love.

(I'm not affiliated with them in any way, though I do live fairly close to their HQ, and I've never even driven by.....shame.)