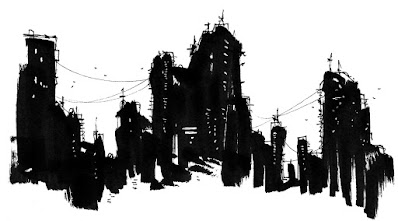 Marvel Super Heroes (FASERIP) is the all time king of random character generation (Traveller is up there, and Heroes Unlimited too.) Often in Marvel, you have to make sense of truly odd power combinations, and many times back yonder, we would just reroll. Screw that. Random generation allows you to create characters that you would never otherwise think of.

It is the path to true originality.

I rolled up this character in all of 10 minutes, 100% random, no fudging, no rerolls. 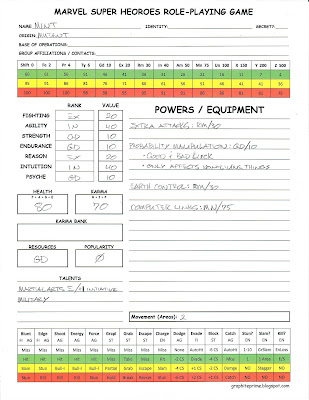 A Mutant...
Improve their Endurance by 1 rank (nice, since I only rolled Typical(6)), one extra power, and zero popularity.
Stats are decent, Health is on par with a lot of street level heroes.
Talents are Military (plenty of sub-plots here, experimented on? Spy?) and Martial Arts E (+1 to initiative, actually makes sense as her two highest stats are Agility and Intuition at Incredible(40) each.)

She can change outcomes, Probability Manipulation (reverses % die rolls), for better and for worse, but only for non-living things -- like making a gun jam. She can manipulate the earth itself, Earth Control (that's earth in an elemental way, as in... dirt) and she has an immensely powerful (Monstrous (75)) connection with computers. Almost sounds like she's from a simulation, a virtual reality, or that's the way she sees reality. She's an architect, a creator, a shaper of the world.

I named her Mint (thought of Warp, Architect, Shaper, etc.)

Extra Attacks, according to the rules, simply gives her a better shot at rolling to see if she can make an extra attack. I prefer to see this power as a minor form of Super Speed, or Super Multi-Tasking. I would allow her to use two powers in one round (makes sense too with her Agility/Intuition.) Perhaps she appears somewhat pixelated when she moves or her Earth Control manifests in a pixilated way like in Minecraft (which I've never played.) Could have called her Pixi...

Earth Control, at the beginning stage only allows you to use clumps of earth to bash and block. There are several other useful things you can develop as power stunts, tunneling, traveling on waves of earth, grappling, earthquakes, sculpting golems, etc.

Combat with this character would never be dull. 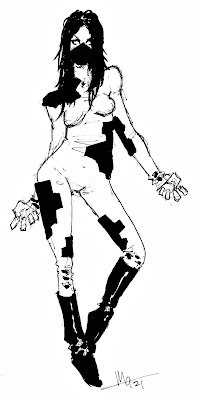 It's not even close.

A Couple Of Updates... 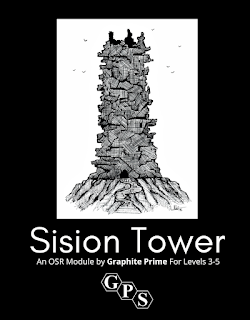 NEW! Sision Tower (black cover) is now available in paperback over at Amazon for $6.99.
https://www.amazon.com/dp/B09MYXZ1PG
Sision Tower, is currently a Silver Best-Seller on DriveThruRPG and was given 5 out of 5 stars by Gabor Lux (whom I now illustrate for) over at BeyondFomalhaut.blogspot:
http://beyondfomalhaut.blogspot.com/2019/04/review-sision-tower.html
Thank You Gabor! 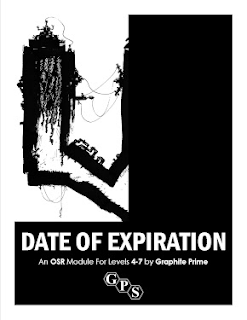 DATE OF EXPIRATION, is currently a Copper Best-Seller over at DriveThruRPG and was simultaneously released as a paperback on Amazon.
https://www.amazon.com/dp/B09GJS7RJS
DATE OF EXPIRATION, was just given the rank of BEST by Bryce Lynch over at tenfootpole.org:
https://tenfootpole.org/ironspike/?p=7653
Thank You Bryce!
at December 05, 2021 8 comments: