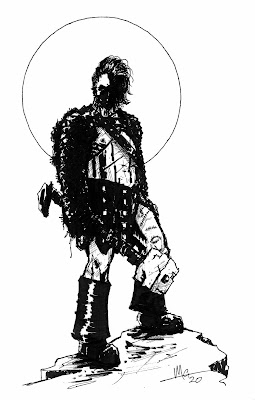 My vision of a Chaos Champion.
Troika
In the game, Troika is the name of a city.
Troika! is a game based on the Advanced Fighting Fantasy books of yesteryear, which I swear, I only heard about this year. How is that possible? I don't know. I must have seen them in bookstores way back when, but maybe not, were they even sold here in the states?

It's a little hardback book with cool interior art that reminds me of a deck of cards. The imagery is surreal and abstract which allows you to make of Troika! what you will and as you can see by my art above, I chose to make of it -- Sword & Sorcery, Dungeon-Crawl, Savage  Bad-Assery! 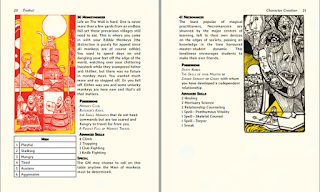 Things I would alter or add:
Once again, another cool game, not unlike the magnificent Mörk Borg. This game's mechanics hit a lot of the right buttons for me. And to think most of these rules have been around for decades.
So here's the character sheet I came up with. At first, I thought the rules were too simple for a full page sheet, but that's when you can make it interesting. I'm pretty pleased with this one.
Troika! Character Sheet 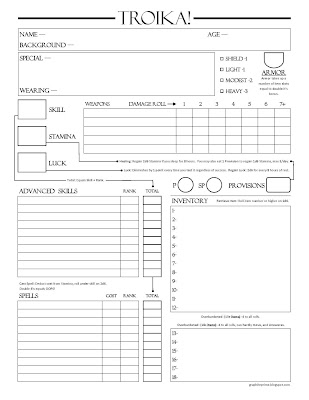 Here's the sheet in action with the Chaos Champion I drew at the top of the post... 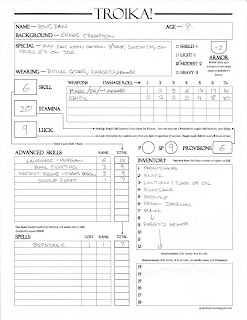 And as a bonus, here are stats I made for a Morning Star (flail.) It's not quite as good as a Mace, but it ignores shields. So, if you're fighting someone protected only by a shield, rolling a 2, 4, or 6 will result in 1 more point of damage than a mace would. It's also 1 point better than the mace in the 7+ column to account for the extra momentum gained from that perfect strike. Still, the more armor involved, the mace becomes a better choice. (And for God's sake when wielding a Morning Star, wear gauntlets!) 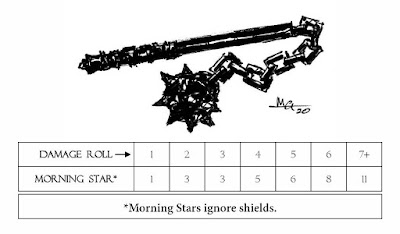 What Happened In That Town? 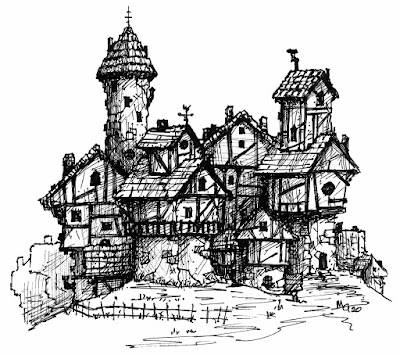 What Happened In That Town?

2. Purse Cut: You were robbed of 1d4 x 100 GP worth of treasure (or all of your coins if you didn't have that much) unless, you make a successful attack roll vs leather armor, which means you gut the bastard gaining 2d6 x 10 XP.

3.Charmed: You met a new friend. You liked them so much that you loaned them all of your cash, i.e., unless you saved vs spells and broke the asshole's nose gaining a +2 bonus vs all Charm spells from now on.

4. Royal Hunt: Somehow, you found yourself a guest at a Royal Hunt just outside of town. Make 3 ranged attack rolls vs leather +1 armor. Make all 3 and gain 1 point of charisma as word of your prowess spreads and people are pleased to meet you. Make 2 of 3 and you've impressed a nobleman who might sponsor your next expedition or spring you from jail, either way, you've got a royal favor in your back pocket. Make 1 of 3 and nothing changes for your forgettable ass. Miss all 3 and word spreads of your incompetence, lose 1 point of charisma as folks chuckle when they hear your name.

5. Stolen Steed: If you had a horse stabled at the Inn, it's gone. (Stable boy sold it.)

7. Beggars: "Alms for the poor," she said as you walked through the Alley of Sadness. Did you give? What kind of coin? Copper--she nods and blesses you. Silver--her eyes light up as she thanks you and quickly hides the coin, others take notice. Gold--she's speechless, yet can't hide her hunger for the treasure, another tries to take it from her, but she fends him off. Platinum--she didn't even have a chance to react as she is buried beneath a mob of jealous beggars. Her fate was grim, but you meant well and the Gods that matter grant you a boon: You can reroll your next 1d4 failed rolls.

9. Assassin Strikes!: Only you know why that assassin tried to kill you. It was a tedious dual, but you fought him off.....or did you? Make 3 attack rolls vs leather +2 armor, succeed on 3 of 3 and you gain +1 to-hit. Succeed on 2 of 3 and you gain 1 hit point. Succeed on 1 of 3 and the assassin's poison saps you permanently of 1 point from a randomly rolled ability. Fail all 3...nice knowing you pal.

11. Fire!: There is no more town. This really sucks, but, anything that you weren't carrying on you was lost when the inn went up in flames. Sorry bud.

12. Plague: This is not the place you want to be right now! Sores and boils, bleeding eyes and cracked skin, vomit and shit. Turn around! Too late. Save vs paralysis until you have 3 consecutive successes or 3 consecutive failures. Pass and you're good, gain 1 point of constitution and immunity to this plague. Fail and you lose 1d4 hit points permanently and also lose 1 point of charisma due to plague scars.

13. Peasant Unrest: Chaos reigns. The taxes were too high, the royal abuses too many, and the food too scarce. Now, there's a Guillotine around every corner, buildings burn, neighbors pillage neighbors, and bodies hang from the bridge. You, my friend, were caught right in the middle of it. Make an attack vs leather to fend off the mob. Save vs breath to avoid the flames. Make another attack vs chain to beat back the guards. Save vs paralysis to avoid hunger. And save vs spells to forget the disturbing scenes of urban madness. Gain 100 XP for each successful roll you made, but, if you failed all 5 rolls you lose 1 point of wisdom as your mind is just a little more numb than it used to be.

14. Succubus: You are haunted by a Succubus every night until you make 2 consecutive saves vs Paralysis (1 save per night.) Every save you fail costs you 1d4 non-heal-able hit points, which ultimately return at a rate of 1d4 per week. If you made the first 2 saves in a row, she flees and you gain 2 points of Charisma...there's just something about you now.

15. Taxation: Property, trade, land, boarding, services, etc. Everything was taxed at ridiculous levels. How else was the king supposed to pay for his latest crusade? You're out an additional 3d4 x 10 GP. And if you don't pay, don't come here again, the guards know your face.

16. Strange Customs: Man, this fucking town. They made you eat something alive and squirming from the river, save vs poison. They don't bathe here, and neither did you, save vs disease. And why did it have to be snakes that they revered so much and allowed to squirm all over you no matter what you were doing? -save vs petrification. Also, if you wanted milk you had to drink it directly from the cow, because, that's how they did it, save vs poison, again. Curious how everything in town was painted in a dizzying, black and white checkered pattern, including these long winding streets and circular towers...man your head, save vs spells. If you make 3 of these 5 saves, gain 1 point of wisdom as you are now just a bit more worldly. But yeah, fuck this place.

19. False Accusation: "It was that one!" Screams the dirt-covered peasant surrounded by guards. Make a Reaction Roll as you plead your innocence: (2d6) 2-3. You're placed under arrest, hiring an advocate to plead your case costs you 3d6 x 10 GP and 2d4 days of time. 4-6. They're not buying it, roll again with -4 to your roll. 7-9. You're kind of convincing, roll again. 10-11. They believe you, but you suffer -2 to reaction rolls in this town for the duration of your stay. 12. They arrest the accuser for bearing false witness!

20. Siege: That's right, hero, you're stuck here for the next 1d6+6 months. Save vs poison to avoid starvation and rotting food supplies. Save vs wands to avoid artillery. Save vs paralysis to avoid the elements. Save vs breath to avoid their dragon. Save vs magic to avoid their wizards. Pass all 5 saves, congratulations you survived the siege and gain a level. Fail all 5 and lose 1 point from 3 random abilities due to stress and malnutrition. Otherwise, just be thankful you're alive.