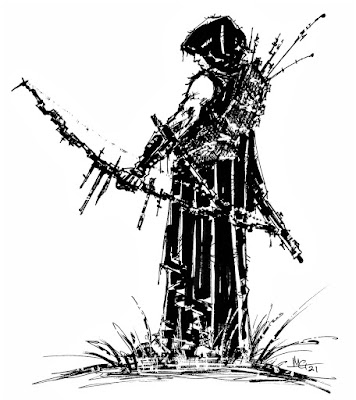 Once again I open the year with Palladium...
In between ideas, looking for a book to flip through... of course I grab from my Palladium shelf...
RIFTS: Ultimate Edition.
This time, I flip to the Wilderness Scout...

Except, these are not special abilities at all, they're just, well... skills. And they're basically just fluff story skills that would rarely come up during play and can really be summed up under Land Navigation, which already exists.
Every class, in every game system, should have abilities that make them valuable to the team, and I'm not talking, balance, I'm talking usefulness, like, "Holy shit, am I glad we have a Wilderness Scout right now!"
Something like this would make this class a little cooler...

Anybody familiar with this blog knows that I love Palladium Books regardless of inconsistencies and contradictions in the rules over many books and sometimes within the same book. I mean, who cares, especially from an OSR, DIY point of view? Yet, I would agree that changes could be made. They won't be, which is understandable, because there's too big of a catalogue that could made obsolete. So, we make these changes ourselves.

The three barriers preventing people from enjoying Palladium Games, as far as I see it are:

So, using the Wilderness Scout as an example, here's how I would present character creation:

So, Skills... Looking at the Wilderness Scout O.C.C. Skills (pg. 99), the ones below are the only ones I would bother with as automatic to the class:
To make life easier for you, assume all skills start at a base of 35% and don't forget to add a possible  I.Q. bonus.
Now you could (and probably should) stop right there and not worry about what follows, but...
Normally, what comes next are some O.C.C. related skills followed by several secondary skills. The real drag here is all the page flipping back and forth between the class page and the section on skills. Because you get to choose all of these new skills, you're obviously going to search for the best ones. Not too painful if you're familiar with the system, but this is an enjoyment barrier for new or even occasional RIFTS fans.
Another nuisance with such skill-based systems (in RIFTS case, it's a pseudo skill-based system, combat is d20 based) is that upon leveling up, you need to go down your character sheet, skill by skill, and this will easily be 20+ skills, adding 5% to each one (not to mention all your weapon proficiency and special ability bonuses that come at various levels.)

What I would rather do, after recording your automatic skills, is roll randomly, say, 10 times on a custom skill chart (or series of charts) containing mostly related skills and the automatic ones, but also including some possible outliers to see what other skills you have. If you roll an automatic skill, you get a further 5% bonus every time you roll it. If you roll a new skill, you get it at the base 35% and a further 5% bonus every time you roll it again. If you roll a physical skill that you already have, you get those bonuses a second time (e.g., if you roll Athletics and you already have it, now you have Athletics x 2.) If you reroll a weapon proficiency you get an extra +1 bonus.

Then when you level up, at even levels add 5% to all of your % skills and at odd levels add +1 to any weapon proficiencies. Also each time you level up, you get to roll on the class skill chart 4 or 5 times, or 1d6 times (for further randomness.)

Special Abilities improve at the listed rate or at the same rate as % or +1 skills (even and odd levels.)

Unfortunately, designing these charts for every class would be beyond tedious, so this dream really is dead on arrival.

I'm a dreamer, but like I said earlier, take the obvious automatic class skills and stop right there!