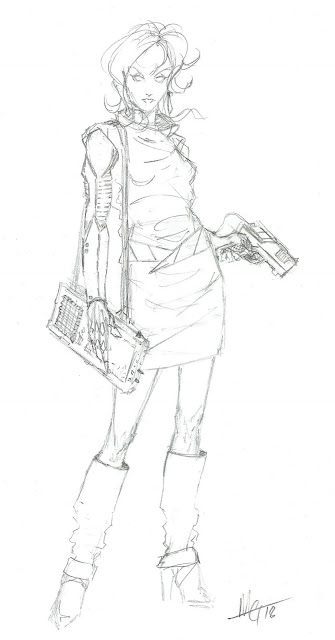 Cyberpunk Version 2.0.2.0. RolePlaying in the Dark Future came out in 1990 and it was too edgy for the teenage me.  I wish I played this game when I was younger.  But, as Cyberpunk puts it, I was one of those players still playing that other game with the happy elves.

My appreciation for the Cyberpunk genre was a much later development.  I read Gibson's books and liked them, but didn't love them because I feel that in my mind Cyberpunk had already taken on a certain style.  A style that Gibson touched upon sometimes.  Perhaps I was tainted by anime, I don't know.

Cyberpunk is back in the news these days.  R. Talsorian Games is set to release their Witcher RPG which is supposedly based on Cyberpunk's Fuzion/Interlock system.  This is creating a lot of buzz for the company.  Apparently the long awaited Cyberpunk 2077 video game is not too far away.  And this fall/winter is supposed to see the release of a revised Cyberpunk RPG called Cyberpunk Red.  Take all of that with a grain of salt, I only know what the forums know.

Sooo, this put Cyberpunk back into my head.  I revisited the rules, gave them some thought, rolled up some characters, and redesigned the character sheet.  This character sheet reflects my philosophy for playing this game.  There is no second page for life-path generation or for excessive amounts of gear.  I prefer the notion that you don't really know who you are until that first roll of the die. It's a more pulpy take -- I prefer mysterious backgrounds.  Nor do I like characters armed to the teeth.  There's plenty of space on this sheet for your stuff.  Besides, you're about to get wasted and put into the spare parts wagon. 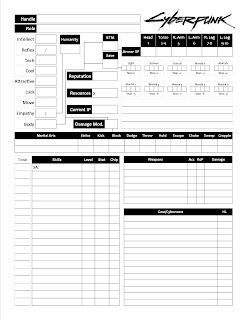 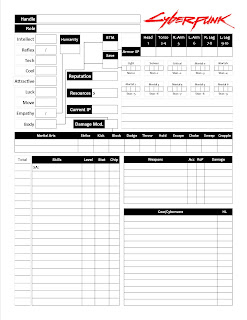 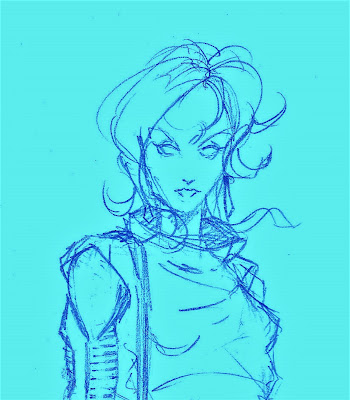