A Shaman I rolled up

Robert E. Howard, Clark Ashton Smith, H.P. Lovecraft, these are the three main authors (among a few others) that Jeffrey P. Talanian's, HYPERBOREA, (formerly, Astonishing Swordsmen & Sorcerers Of...) seeks to emulate using a chassis that lies somewhere between B/X and AD&D. 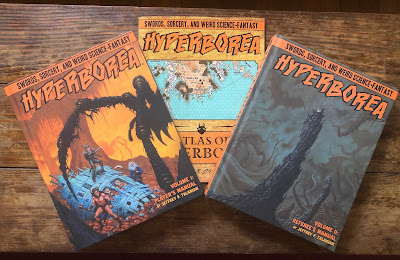 This is technically the third edition of this game which was first published as a box set in 2013, then as a massive hardback tome in 2017. I own neither of those two editions, though, I was aware of them. By the time this game really captured my attention, the first two editions were out of print and rare. I had managed to view a PDF of the 2nd edition (back when such a thing was easier) and what stuck in my head were these cool pencil sketches... more on that below. A perfectly-bound, paperback Player's Manual, also came into existence not too long ago, which I was all set to buy, when I discovered that a 3rd edition was imminent. That 3rd edition kickstarted about a year ago, the result of which are the handsome books you see above.

Physically each book is a little over 300 pages (Player's Manual and Referee's Manual.) Both covers have this cool matte feel to them and the interior pages are cream colored, non-glossy and very easy to read. The layout is clean, well organized and full of art (some great, some not-so great.) Basically, these are nice books. (Personally, I would've preferred a single giant tome, like the 2nd Edition.)

Also pictured above is the soft-cover atlas of the HYPERBOREAN world -- which exists far into the future, is shaped like a planetary-sized hex, and orbits somewhere out near Saturn around a now dying, red sun. This is sword & sorcery for the most part, but there are elements of sword & science such as you see on the above Player's Manual cover and in the picture below. Obviously it's up to you if you want your knightly warrior to wield a ray-gun (aside from my own anomalous adventure, DATE OF EXPIRATION, it's usually not my thing) Setting aside, it's the system that I care most about... 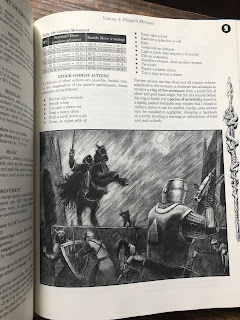 And this system is fairly standard D&D -- classes, hit points, armor class, saving throws, Vancian-ish Magic, etc. The rules are not quite as basic as B/X, yet not as detailed as AD&D.

Where HYPERBOREA is neither basic or advanced, is how it handles races. Here, with the exceptions of Atlantean and Hyperborean (who are technically not humans) you only play as humans. The races are as follows:

Most of you will have a fair idea of the gist of these races (from Howard, Smith, etc.) And though there are plenty of tables to determine your character's height, weight, eye color, hair color, complexion, age, and name, your race offers ZERO actual in-game benefits, even if you're playing an Atlantean or Hyperborean. Race is merely a descriptor, fluff. This is BORING (especially after reviewing Deathstalkers) but I get it: Beware the woke twitter mob. State that one type of human is better at something than another, even in a FANTASY setting, and all Hell breaks loose.
Of course, there's nothing from stopping you from adding Demi-Humans and/or bonus/penalties to your HYPERBOREAN game...
Classes. If you love lots of classes (and I love lots of classes) you'll be happy: 4 main classes with 22 sub-classes (some of the names though... ugh!)
These classes are generally well designed and do pretty much what you'd want them to. Occasionally, there's a fluff ability, like horsemanship or survival, which are only as useful as the DM wants them to be. I will always prefer actual mechanics.
Classes are listed to level 12. They all have the same single saving-throw progression, staring at 16 and improving by 1 every other level to 11 at 12th level. So, even at 12th level, your saves will only hover around 50%, which is kind of rough for a seasoned sword & sorcery protagonist. Each class also receives two +2 bonuses to specific saves, which are the classic five renamed to:
Dexterity can also improve Avoidance, and Constitution and Wisdom can improve specific situations like poison and willpower, respectively. So, the saving throw system is an amalgamation, ranging from a single save to five and beyond.
Your "to-hit" bonus is called fighting and progresses logically, as opposed to the weird progression of B/X.
Armor Class is descending. Easily fixed if not your thing.
Also, medium and heavy armors offer a bit of damage resistance, 1 or 2 points.
Attribute checks, called tests are done on 1d6 and are primarily based on the classic open doors mechanic. These are things such as opening stuck doors, balancing on a beam, or swimming across a lake. There are also extraordinary feats which are based on the old bend bars/lift gates mechanic, a % roll. Tougher challenges, lower rates of success. Mental attributes do not have tests or feats as the author deems there are too many variables to consider.
The optional concentration check for spell-casters is very cool: If you take damage while casting, roll 3d6 + damage taken. If you roll under your casting attribute score (intelligence or wisdom) your spell succeeds, otherwise, not.
One thing HYPERBOREA does take from AD&D is multiple attacks per round in the form of 3/2 at 7th level for fighters. This can improve to 2/2 and 5/2 with weapon/grand mastery (depending on the weapon.) For the uninitiated, 3/2 means two attacks every other round. This was always clumsy in practice, in my experience. Just give them 2 attacks, then 3, and be done with it. Or give them a damage bonus, or both of these things. Forget the fractions.
Some other thoughts...
Art is important to me...
Questionable decisions were made with art in this version, which represents a step back. Thankfully, Ian Baggley's awesome sketches still remain, if not front and center, where they belong.
Baggley Barbarian 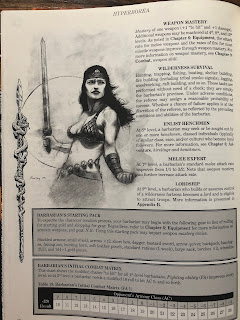 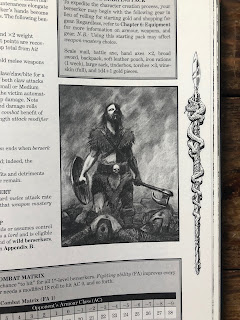 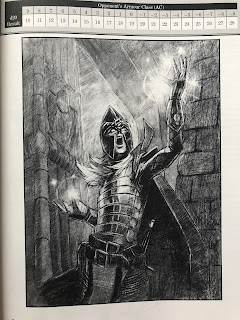 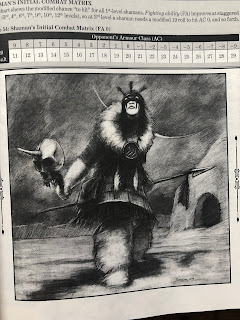 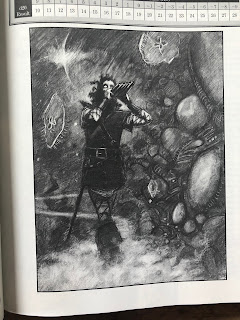 The Monsters...
No dragons. Kind of weird, as dragons do exist in sword & sorcery, but... ok, they're easy to add. I understand not wanting D&D's chromatic dragons, but random tables to determine dragon color, breath, HD, and other abilities would have been cool, sort of a "create your own dragon" type of thing. Otherwise, HYPERBOREA has one of the best done bestiary sections out there. Good art, good write-ups, a bit of grit (these are not WoTC/Disney monsters.) Stat blocks have the perfect balance of information. I do, however, have one complaint: There are no random encounter tables. What?!?
Nice Succubus! (But they don't drain levels or stats, why not?) 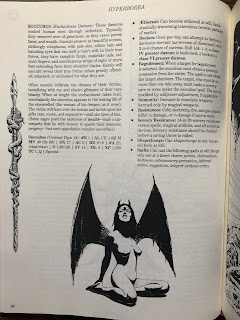 Magic Items and spells are a combination of the usual fare with new additions. Recognize this?
Round here we call this a Glaive 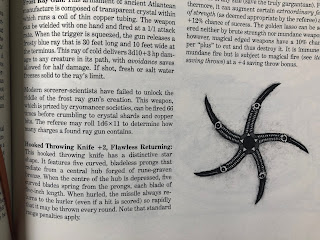 HYPERBOREA's a solid game which strikes a nice balance between simplicity and detail. It definitely evokes that sword & sorcery feel and if the I.P. wasn't so closely guarded (which I understand) it could easily contend with OSE as the go-to system for many. All-in-all, an excellent game with some cool ideas that make you wonder, why didn't I think of that?
And here is the character sheet I made for it. The official character sheet is alright, but you know me...