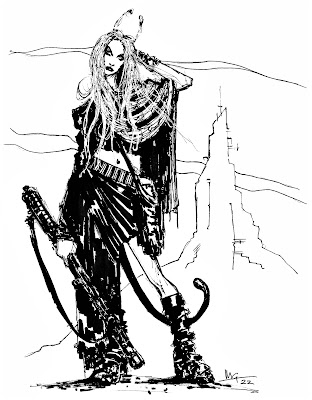 I owned (own) all the usual TSR stuff, D&D, Marvel Super Heroes, Star Frontiers, Top Secret, I once played Boot Hill and I even played Indiana Jones, but I never owned GAMMA WORLD, nor did any of my friends, nor do I even remember seeing it in any of the stores, because, I would have bought it. The exception to this was in the early 90s when I purchased the 4th edition of the game, this one... 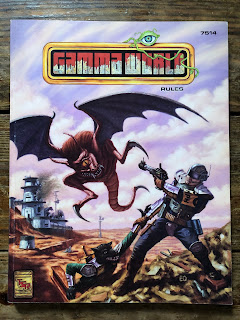 It's strange how this classic game evaded me and mine throughout the 80s. We all knew about it and it would come up in conversations, "Ever play GAMMA WORLD?" By the time I acquired this copy and read through it though, I wasn't all that impressed, as it seemed too D&D-ish to me at a time when I was looking for newer mechanics. I soon entered a non-gaming phase and even when I resumed rolling dice, GAMMA WORLD sat there, in a box, mostly untouched... for 30 years.  And it's current condition -- like brand new.
Of course, in recent years, one way or another, I've been able to scan through the various editions of GAMMA WORLD and it seems that this edition (4th) (not to be confused with the one based on D&D 4E) is regarded by many as the best, or at the very least, one of.
I've had post-apocalyptic stuff on my brain lately, so I dug this out, scanned through it and rolled up a character or two.
This is the game that Numenera is trying to be.
Esthetics and some other things (this is not a proper review, it's more of a stream of thought.)
I find the cover boring, but a lot of classic GAMMA WORLD cover art is present inside along with cool inked works, many by the great Larry Elmore. The interior layout is black and white laced with green highlights and charts. It's not the most exciting book to flip through, but it works.
After scanning through and rolling up characters, I see so much potential to my modern OSR eyes. It's connection to D&D is not a bad thing at all, in fact there are cool mechanics here that I'm surprised never actually made the jump over to D&D proper.
The character I rolled up (drawn above)... 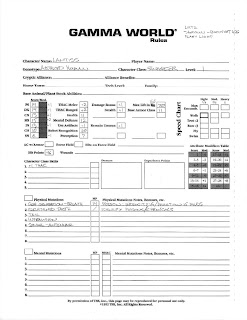 Btw, this isn't a bad character sheet, still, I should draft my own.
Characters are made up of Genotypes (race), Class, and Cryptic Alliance (sort of like Planescape's Sects -- how you see the world along with the pros & cons of that. Where-as Planescape's Sects are cool, I don't find the Cryptic Alliances particularly interesting, probably because I don't like my post-apocalypse to be that well organized, but, you never know.)
Notice the triad, though...
Now if you're familiar with Numenera (a modern game about collecting artifacts from a bygone era) -- your character is an, Adjective Noun who Verbs. Here, you're a Genotype Cryptic Alliance who Classes (e.g., a Pure Strain Human Archivist who Enforces.) It doesn't work, nor is it even stated in that way, but I'm convinced there's a connection.
The Genotypes are: Pure Strain Humans, Altered Humans (mutants), Mutated Animals, and Sentient Plants. I get the impression that many people play/played GAMMA WORLD as goofy/gonzo. I don't like goofy shit. I like dark and serious, and that's how I would run my GAMMA WORLD game -- dark, survival-oriented. It would almost have to be a hex-crawl thing where you're always looking for food & supplies because that's what the post-apocalypse would be (and yes I've heard of Mutant: Year Zero.)
Classes are (with their Numenera counterparts): Enforcer (Glaive), Esper (Nano), Examiner (all of them), and Scout (Jack.) Numenera also has a Mutant class. I like the archetypes in theory, but feel compelled to redesign all of them. The class skills just feel... meh.
You have an AC and an MD (mental defense) that are target numbers for foes to hit and you have Health, Use Artifacts, Robot Recognition (this is actually how well robots recognize you as "human" and thus, obey) Stealth, Remain Unseen, and Perception which are all saving-throw or other types of rolls (actually, Perception functions like AC vs. Stealth or Remain Unseen attempts, btw, Stealth and Remain Unseen, is redundant.) These derived stats are pretty cool and are the concepts that I'm surprised D&D never adopted, especially MD.
Hit Points are a number of D6s equal to your Constitution + 1d6 per level up to 10th (BTW, your stats are: Physical Strength, Dexterity, Constitution, Mental Strength, Intelligence, Charisma, and Senses, with the same bonuses as modern versions of D&D and are mostly generated by 4d6 drop the lowest.) It seems like a lot of hit points, but weapons and creatures in this game do a lot of damage and you're only supposed to heal 1 point per day -- that's rough.
Poison and Radiation rules are cool and are basically an Intensity Rank plus a D20 roll vs. your Health score, the higher the roll, the worse the effect. Radiation can also cause mutations.
Lets take a look at the mutations I rolled for this Altered Human, Enforcer (5 physical, 0 mental):
Not all mutations are beneficial... this is cool.
Artifacts. So many are lame. I don't care to find a toaster or a stapler or a blow dryer. This is where Numenera does it better. There, all Artifacts are useful and the Numenera depletion rules are great -- for any game. I would also skip the Use Artifacts Diagram, it's cool in a way, but tedious (imagine going through all of that rolling just to find out you've found a pencil sharpener!)
GAMMA WORLD has a monetary unit called the Domar (Numenera has Shins.) I wouldn't have a monetary system at all, it should only be scavenging and barter. So I randomly rolled three artifacts for her to start with and got a Lute, a Shotgun, and a Flash Light. Shotguns do 4d6 damage.
Chain and plate mail and such exist here, but I would portray them differently, Mad Max-ish, not medieval. I would also add some kind of penalty to heavy armors or have them deplete.
Monsters are basically mutated plants/animals/robots of a 70s/80s imagination. Some are cool, but I would go the Numenera route here, draw something strange -- give it stats!
It's a shame that Numenera's mechanics are dumb, because... cool ideas. But GAMMA WORLD'S mechanics are mostly not dumb. These GAMMA WORLD rules laced with Numenera's Artifacts and character creation could result in one of the coolest games of all time.
Still, GAMMA WORLD 4th Edition, on it's own and without modification is pretty damn solid.
To those of you who enjoyed this game... I salute you!