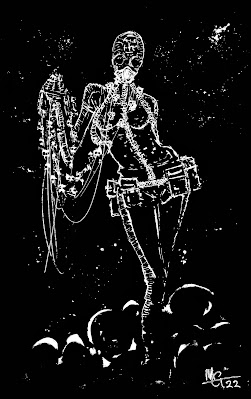 DEATH IN SPACE, is brought to us by the Stockholm Kartell (the same group that spawned Mörk Borg) by creators Christian Plogfors and Carl Niblaeus.

The books are gorgeous of course... 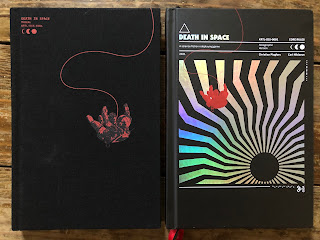 These arrived several days ago -- solid, durable books that came packed in the most secure bubble-wrap I think I've ever seen. So all good there.
Every page is black with white letters, because, well... space, and the art, ranking among the best I've ever seen in an RPG, is drawn in a negative style (something I tried to replicate with my drawing above.) Organizationally, the book is stylized, but much more orderly and easier to use than Mörk Borg. The chapters are color coordinated which can make some words hard to read when they are printed in darker colors against the black, this is most evident in the character creation chapter. But, like I said, this is a beautiful book and beautiful books make you want to play the game. 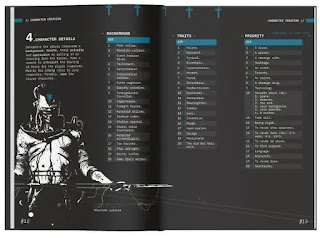 Speaking of the game...
DEATH IN SPACE uses the same basic mechanics as it's predecessor, Mörk Borg, albeit slightly more refined. You have 4 stats, in this case, Body, Dexterity, Savvy, and Tech. You roll a d4-d4 giving you a range of 7 possible values (-3, -2, -1, 0, 1, 2, 3.) It's a d20 system and the target number is always 12, so d20 +/- stat vs 12. Sometimes you can have advantage/disadvantage -- I think you all know what that means.
Interestingly, one can find online, a playtest character sheet that lists 6 stats instead of 4, more akin to classic D&D stats.
Comparing this to Mörk Borg where you have: Agility, Presence, Strength, and Toughness, all rolled using 3d6 and comparing the results to a chart for results -3 to 3, ultimately maxing out at 6 (DEATH IN SPACE does not mention any ability caps that I noticed.) In both games, Dexterity/Agility is not used for ranged attacks, instead those are resolved with Tech & Presence. Mörk Borg is player-facing (meaning the players roll to attack and defend) DEATH IN SPACE is not. Mörk Bork also lists multiple difficulty ratings (target numbers) starting at 12 and increasing or decreasing by 2s for easy or harder. DEATH IN SPACE only ever mentions rolling against 12 and never actually labels 12 as a "difficulty rating" or "target number." In fact, in DEATH IN SPACE, DR means "defense rating."
Let's look at this character whom I named, Zo Dage... 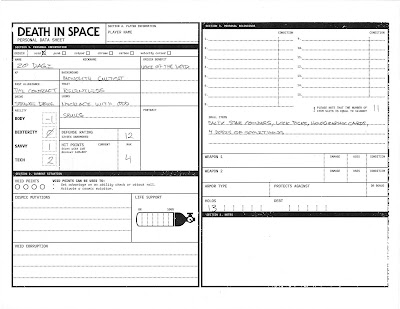 Btw, very cool character sheet!
Defense Rating is your Armor Class and it equals 12 + Dexterity. That is your unarmored value, but armor in this game (at least in the core rules) will only get you, at most, 2 more points (yikes!) Personally, I think armor should be more affective than that (perhaps adding a bit of damage reduction balanced by a roll penalty due to bulk, yeah, I would definitely tinker with the armor rules) but this game is stressed as blue-collar in space, a setting where everything is second-hand scrap.
And it is deadly.

With 4 Hit Points, Zo Dage, will most likely not survive her first run-in with damage. (House Rule Thought: Staring hit points equal 8 modified by Body, perhaps doubled for something a bit more heroic, the game will still be plenty deadly.)

She did not get a weapon during character creation or the funds to purchase one. Money is called Holos, btw, and she only has 13. With a Tech of 2, she'd be a decent shot (50%) if she gets her hands on a gun.

Her origin is Void (of course I rolled Void!-- see Praise The Fallen.) You can pick one of two abilities: A re-shapeable mask or the ability to make electronics crackle with static -- which is odd considering the game states that a static already permeates all electronics. Perhaps her ability should stop the crackling, allow for a communication bonus...?

There is definitely flavor here, but right off the bat, I'm contemplating creating some minor bonuses for each of these things.

The game also features Void Corruption and Mutations, some are abilities and some are fluff. There are rules for space travel, space combat, and exposure to the vacuum of space itself -- not as lethal as one might think as long as help is nearby. A handful of monsters and threats are also included, most of them should be avoided at all costs in true space-horror fashion. A bestiary of sorts, however, will be hungered for.

Here's an example of a monster stat-block, the Apsis Ape, which would easily wipe out a party. Clean for the most part, but I think it would be more readable if the values were in white, e.g., DEX in yellow followed by -1 in white. Also, the actual attack roll should've been included where it says (BDY, 1d8) which means: 1d20 + Body vs 12, doing 1d8 damage. In this particular case (BDY, 8+, 1d8) would save the DM from having to do the, albeit brief, calculation.

Another huge part of the game is constructing and maintaining your HUB, a ship or a station, in fact, it is really your main motivation. This kind of gives the game a post-apocalyptic survival feel, accept, you are not planet-side, you're in deep space, in a system called Tenebris. Your beginning HUB is bare bones and no advice is given on how to map it out. Fleeting examples seem to prefer something dungeonesque inside the outline of a ship.

If you choose a station as your HUB it will most likely be attached to this massive structure called, the Iron Ring, which circles the moon Inauro like a belt of metal. It's made up of a mixture of derelict ships, stations, huge mining crafts, and all sorts of other junk. Sometimes you walk through it, sometimes you need a shuttle, and sometimes you actually have to jump through space. It's a sort of dungeon in space that includes your home base. An entire campaign can be based here alone with all kinds of hex/dungeon-crawl potential.

Advancement is not as generous as Mörk Borg... which is a good thing, because even as deadly as Mörk Borg is, a few lucky rolls during advancement and your character starts getting pretty tough. In DEATH IN SPACE, you have to spend XP to improve this or that, which will definitely take time, but let's face it, you'll be dead long before then. Also, in a system mostly dependent on 4 main stats, how do explain all of these -2 or -3 Body characters eventually reaching 2, 3 or even higher, going from wimp to strongman? Raising stats needs to be a bit more expensive. This is where improvable (class) abilities would fit nicely, such as weapon specializations, piloting skills, etc., and small bonuses for this or that.

Where Mörk Borg doesn't take itself too seriously, DEATH IN SPACE certainly does. And I appreciate this. I'm the guy that wants grim/dark to actually be grim/dark!

DEATH IN SPACE is imminently hackable, just like the rest of these, rule-light (OSR???) games and before long, we'll be seeing a shit-ton of hacks. This is actually a perfect stepping stone to a classic Post-Apocalyptic version because of it's scavenger nature. The art is right, the tone is right. Personally, when I look at rules-light games like this, I always want to add to them. I always feel, as cool as they are (and this is a cool fucking game) that they are missing just a little something, a few more options perhaps (especially during character creation.) I never want to look at a game, right away, as a one-shot. And yes, I want it to be dangerous, but I want my character to survive a few hits... but no more! -- just enough to have some fun. Just enough to decide, maybe it's time to fall back. Action heroes are cool, combat is cool! 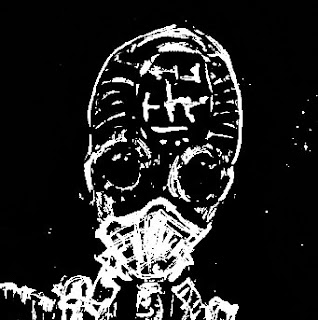 Always make it sexy. DEATH IN SPACE, is brought to us by the Stockholm Kartell (the same group that spawned Mörk Borg) by creators Christian... 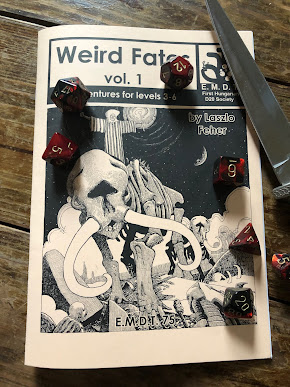